Walks from the door

In Keswick and nearby  The Keswick Museum, recently refurbished and focussing on the local area; The Pencil Museum, telling the story of the humble pencil and it’s origins in Borrowdale and Keswick; and a number of small local independent galleries such as Veridian, Treeby and Bolton, Northern Lights Gallery and Gallery 26 at 27, showcasing and selling work by a diverse range of artists, from local work to modern work from all over the country. The Sharpe Edge Gallery is just outside Keswick near the Castlerigg Stone Circle and Thornthwaite Galleries in Thornthwaite are worth a visit.

Further Afield  To list but a few, there is the Steamboat Museum in Windermere, The Lakeland Motor Museum in the Leven Valley, the Bowes Museum at Barnard Castle, and Tullie House in Carlisle. Grasmere is home to the Heaton Cooper Studio and Kendal home to Abbot Hall Art Gallery.

In Keswick  The Theatre by the Lake has a professional resident company with Judi Dench as its patron and it stages at least six productions in repertoire each season in two auditoriums. We are TbtL ambassadors so our guests can receive a discount, just ask! Keswick still boasts its original art deco cinema, the Alhambra, which celebrated its 100th birthday in 2014, shows the new releases and has an award winning film club and hosts the Keswick Film Fesitval each February. We provide guests with an up to date ‘what’s on’ each week in their accommodation.

Lakeland is famous for being an inspiration to so many well known literary names.

Nearby  Our immediate area was home for many years to Beatirx Potter with her early books inspired by Derwentwater and Catbells. Look out for Littletown, just over the hill from Manesty, where Lucie lost her pocket and bumped in to Mrs Tiggy Winkle; peep through Mr MacGregors garden fence on the walk past Fawe Park; and visit Brown Owl’s Island, which was inspired by St Herbert’s Island on Derwentwater. Alan’s mother Sally claimed to know exactly which oak tree was Brown Owl’s! The beautiful opening panorama in Miss Potter is even more effective when it includes where you are staying.

Hugh Walpole set his Herries Chronicles in Borrowdale and lived just a few hundred yards up the road at Brackenburn. Alan’s grandfather delivered his milk and perhaps this is why a Mrs Leyland appears, rather anachronistically, in one of the books.

Arthur Ransome’s Swallows and Amazons drew inspiration from all over the Lake District and you can see a strong resemblance between Friar’s Crag on Derwentwater and his drawing of ‘The Peak in Darien’ in the first book.

Further Afield  No trip to the Lake District would be complete without exploring the poets’ houses connected with Wordsworth, Southey, Coleridge and Ruskin in Rydal (Rydal Mount), Grasmere (Dove Cottage), Cockermouth (Wordsworth House) and Coniston (Brantwood). You can also visit Hill Top Farm, Beatrix Potter’s home in her later years, at Near Sawry, Hawkshead.

Nearby  ‘Star Wars 7’ drew inspiration from Derwentwater and the North Lakes for the tree covered planet Takodana and Maz Kanata’s castle was set (using CGI) on the southern shores of Dewentwater less than a mile from Manesty. Take a picnic there and imagine the Millenium Falcon, TIE fighters and X-wings flying in over your head and picture Ray, Finn, Han and Chewy fighting it out on the ground with the Stormtroopers. 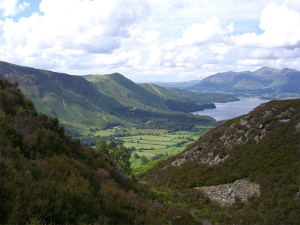 Manesty and Derwentwater from Kings How 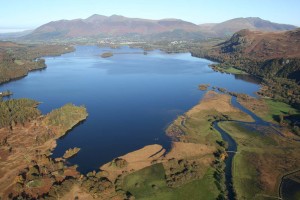 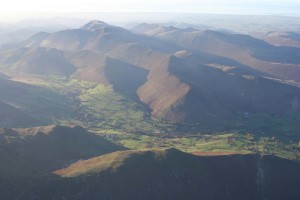 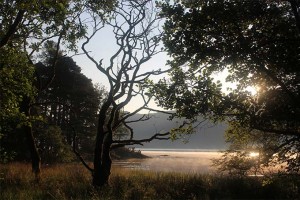 Sunrise on Derwentwater in the bay where Star Wars was filmed

We offer short breaks and full week holidays all year round, with usual arrivals on Fridays, Saturdays and Mondays, depending on the accommodation. We can sometimes be more flexible, so if you cannot find what you are looking for please do not hesitate to get in touch by using the enquiry form, by emailing us or by giving us a ring.

We look forward to hearing from you!